The Verno siblings are my great-grandaunts (Helena, Valentina, Maria), uncles (Voldomar, Pavel) and my great-grandmother Julia. My grandmother was born in Estonia but the generation before her seems to come from a part that today belongs to Russia. I don't know very much about that part of the family and that makes it so much more interesting. Also, mainly all information is in Estonian and Russian, two languages I don't know and that ofcourse makes it a little (well, much to be honest) harder to find information and takes a lot more time. On the other hand, great pleasure everytime a tiny bit in the puzzle is solved.


Sonja Verno was my greatgrandaunt. Sonja (or Sofie as she was known as in the US where she immigrated) was born December 18, 1896 in in Pskov (Псков), today in Russia. The Estonian name is Pihkva. She was the daugther of August Verno and Anna Lindenberg, both of them born in Russia.

According to a document from 1920s she was an Estonian citizen and she was an actress (näitleja). Perhaps that is how she met her husband who was in the same businesses, Leo Oeberg, an actor. They got married in Tallinn May 1, 1921.

At my grandmothers christening in 1922 in Tallinn Sofie and her brother Voldemar were sponsors so even if I don't know much about them they seem to have been close. 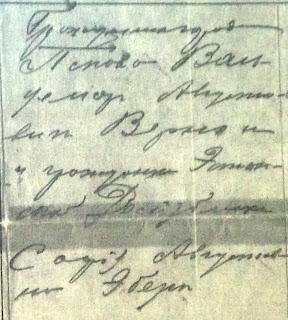 Sofie and Leo arrived with USAT General W C Langfitt in New Orleans, April 6 1950. They settled in San Francisco, California where Sofie worked as a dressmaker. 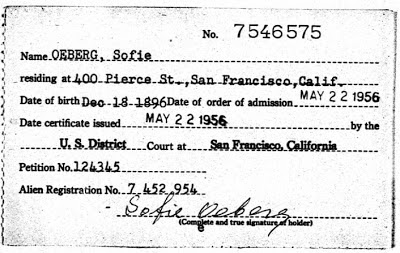 In 1956, a year after her husband Leo died, she became a US citizen. She lived at 400 Pierce Street.

Sofie died October 31 in 1961. Most of the information about places and dates I got from two different  documents, her funeral record (found at ancestry.com) and her petition for naturalization (at Familysearch.org). Those records are  is really a great resources, telling place and date of birth and death, parents names and birthplaces, occupation, when, where and how she came to the US and martial status. In the petition you can read that Sofie had eye color grey, brown hair, was 5 feet and 3 inches tall and weighed 136 pounds  (about 160 cm and 75 kg).


The funeral record also says the funeral was November 2 1961. She and her husband Leo are both buried at the Serbian Cemetery in San Francisco. The Museum of Russian Culture, San Francisco have among other things a picture of the headstone and I got permission to use their picture in my blog.


Sofie and Leo didn't have any children.