I would have been blogging during the event if only I would have had a better internetconnection.

Summary: I had a blast!

1) Always have a bottle of water in your bag. When you feel tired, drink!
2a) Buy a cup of coffee to go before going to the event and the huge queue.
2b) A medium Latte from Costa lasts for 45 minutes in a queue.
3) Know there will be a lot of queues!
4) Bring paper and pencil (or laptop/tablet/phone) and write, write and write.
5) Go through your notes in the evening and add your thoughts
6) Look at twitter and see whats going on
7) Have fun! Get motivated! Get inspired! 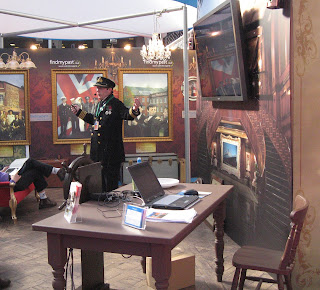 I first heard of this event last year in the Genealogy Gems podcast hosted by Lisa Louise Cooke and it sounded so much fun. A while ago she mentioned it again and I was thinking..hmmm London, never been to UK, but its not THAT far.. I checked what a flight overthere would cost and a closely hotel...Thinking once, thinking twice,  nope, booked and ready to go.

My Friday started early, since there is a timedifference between Sweden and UK, it was even earlier, 3am the time-to-get-up-alarm went off. One hour later I was on the train to Danmark and the airport, checking-in, bagage-drop and security went smooth. On the plane and I was lucky to have a three row all to myself. Unfortunatly my ears have problem with the pressure. I use something called airplanes but when at a  specific height it is quite painful and not much I can do about it. I always take a painkiller before takeoff but the worst thing is that when on the gound I cant hear very well. It is greatly annoying and when I talk everything echoes. And it lasts for days. This time even worse since I have a little cold.

Anyways, got to Gatwick, found a bus to take me to Earls Court (which looked close to my hotel looking at the map at the busticket desk). Well.. got of the bus after about an hour drive.. and I felt quite lost. Doh. Found a tubestation and noticed I was only one station from Kensington Olympia.. I know I was close. So, took the tube and got there.

My plan was to go to my hotel first to drop of the luggage and then to Olympia so lucky enough there was a cab dropping of people right infront of me. Told the driver where I wanted to go and I added, "this is my first time in UK and London". Good thinking! The driver was supernice and told me he had a relative who had some some family research which showed they had Scottich roots. And my hotel was about just around the corner (thats why I booked it, so I would be close and less likely get lost ;) ). He waited when I dropped of my luggage and drove me back.. and before I left he said, when you are leaving this place later and there are cabs outside, dont take one, just walk that way and you will be at your  hotel. :)

Got in just in time for my prebooked class with Lisa on Harness the Power of Google Earth for Your Family History. It was great seeing Lisa live and even if Im working with IT and has been for 17 years you always learn something you didn't know before. I just wanted to get my computer and start GoogleEarhing right away.

After the class I had some time to walk around getting an overview of the booths and joined a DNA Success stories class.

Listend to Nick Barrett and Family History and Education, followed by a presentation by  Daniel Horowitz on How Do we share and preserve memories in a digital era.

At the end of the day I was REALLY tired, walked straight to my hotel and pretty much
fell asleep at once.

Don't know if you are able to be jetlagged with one hour of timedifference but I woke up really early and was the first one down for breakfast. Walked to Olympia and found a quite looooong queue being there 30 minutes before opening. Had a nice chat with my queueneighbour who had been clever enough to drop by a cafe getting a cup off coffee. 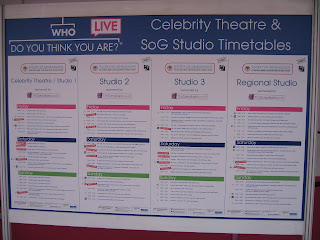 Got in, went upstairs to the next queue and picked up the tickets for the presentations I wanted to attend. Went to my third queue, to the cloakroom. Fourth queue, to Maureen Taylor on finding familyphotos, cant wait to try some of the things she told us about!  Fifth queue, a bottle of water and a sandwich. Sixth queue, to Nick Barratt on Ancestral  Tourism.  Seventh queue, to the Keynote on Family History and Social Media, one of my favorite subjects.  Afterwards I had a nice little chat with Lisa, she is a gem! Queue number eight,
Lisa Lousie Cooke on Google Search Strategies. Queue number nine: Cloakroom. 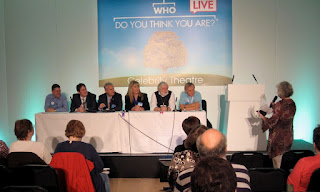 On Sunday, I went by Costa and got myself a medium latte. Yummy! There were some really nice people around me that morning and everyone was so excited and I just couldnt believe it was the last day.

I started out with the birthdaygirl Gill Blanchard and her class on Top Tips, Writing Your Family History. Good tips that really got me thinking. After that class I took the time to walk by every booth more careful and talked to a lot of nice people. I joined Ancetery on one of their presentations. In the afternoon I was at Janet Hovorka and Charts to Visualize Your  Family Tree. She makes some awesome charts. Last presentation, The Future of Family History, I went to the wrong place. Doh. I guess I was a bit tired.

Suddenly it was the end of three fantastic days. I learned so much and I talked to so many nice people. Went out for some food and back to the hotel early. 5 am on Monday a taxi picked me up and I took the Gatwick Xpress from Victoria. Did some shopping at the airport. So, at the plane, after the captain asked everyone to turn the electical equipment off there was a lady sitting next to me that kept texing on her phone... when we were out on the runway getting ready to take off I asked her to turn it off.. When in Copenhagen I saw they people unloading the luggage and that was NOT a pretty sight. Really. It was like they tried to cause damage, throwing, dragging and dropping the luggage around.

Back home, I long for coming back next year, but hopefully sooner to visit London again, since I liked the city A LOT!

So to everyone involved arranging the Who Do You Think You Are Live 2012, the speakers, the exhibitors, the people working at Olympia and visitors, a BIG THANK YOU, I had such a great time!