I have written about my great-great grandfather Nikolai Seck in an earlier blogpost, Nikolai Seck where are you?. As far as I know he had seven children, four sons (August, August Ludwig, Johann Karl Edmund, Nikolai Eduard) and three daughters (Therese Emile Marie, Ida, Alice Charlotte). I am trying to find out as much as possible about them.

This book is in German. As you can see, the name is spelled Seeck. Sometimes you see that spelling, othertimes it is Seck (as my great-grandfather spelled it). There is also a Sek, Sekk and Seek spelling version.

A couple of other things to notice in this record. First of all, I am unable to understand what is written infront of the name of Nicolai. I guess it would be his occupation.

Then, there is the surname of Nicolai that is Seeck. But before that it says Alexander which would be the name of Nicolais' father. So far, so good, but under Alexander it is written "oder Nicolai's". So, does that mean that his fathers name was either Alexander or Nicolai?

Then is the word griech, which means Greek in German and would mean that Nicolai belongs to the Greek Orthodox faith.

Below we have Mari, born Tedder, mother of Johann Karl Edmund. She is a Lutheran, it is written luth after her name.

A list of three names, I guess they were the sponsors at the christening. I have trouble reading what it says.


I haven't found anymore records specific of Johann Karl Edmund, but I have found him with his family in a couple of other records.

Here we have Nicolai Seeck (fathername is Alexander). What "gan. Ahrens" under his names means I have no clue. Far to the left there is something written as well. Can't make it out except for Schloss something. Birth and christening dates for the children August Ludwig, Johann Karl Edmund and Alice Charlotte.

Further to the right there is a column with this headline and this is what is commented on August, Johann and Alice, in that order. 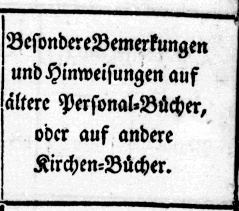 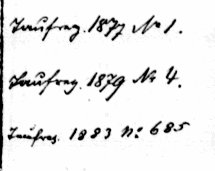 In the last column I think it says "Ab und wann er (sie) die Gemeinde verlassen, oder als Slied derselben gestorben" which I guess means when he / she left / moved or died. 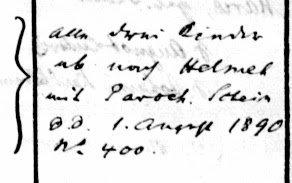 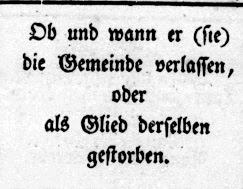 I think it corresponds with this document. You have the date, the number 400 and moving from Rouge to Helme.