This couple is in a photo album that has belonged to either my great grand parents Nils Anton Berlin and Hanna Persson in Farstorp or perhaps thier son-in-law. The photo is taken at Atelier Söderholm in Kristianstad so the couple probably lived somewhere in the Skåne area.

Last weekend I was at a two day long familyreunion in Tving in Blekinge. Day two we all went to the cemetery in Tving to look at some tombstones related to the family. We went there a bit early so I had time to add the cemetery to Billiongraves.com and upload a couple of photos. It was a very sunny day, not suitable for tombstone photography.

This weekend is a big weekend for genealogy in Sweden. It is time for the genealogy event of the year. This year it is held in Köping. Everyone will be there. Well, I am not going this year but I am sure it will be a great time.

So, if you are not going, you could try out Arkiv Digital that will be free of charge this weekend (August 24-25).  If you have Swedish ancestors and you know where they lived you could try and see if you can find them in perhaps a brithbook or a deathbook. I am a subscriber to Arkiv Digital, but I also uses the Swedish National Archives site (Svar) and at times I use Genline (records also available on ancestry.com) as well. The nice thing with Arkiv Digital is that the pictures of the book/records are in color.

They also have an iPad app which I wrote about in an other post).

So, have a look at arkivdigital.net this weekend. You would need to register and then you will have to download the software (available for Windows, Mac and Linux).

Travel Tuesday - I went to Estonia

Coming to Sweden I think they lost contact with more distant relatives back in Estonia which became a part of Soviet Union. I need to mention I never met my grandmother (or grandfather). They had both passed away when I was born. My connection to the past has been my mom of course but Eduard died the same year as she was born and Julia when she was only five. My aunt who is five years older and also a cousin have provided me with most of the names and dates. Some I have been able to find out more about some I still don't have a clue.

When I got bitten with the genealogybug in 2007 I also had some focus on my Estonian side of the family. I discovered that some documents was only available in Russian. So, I took a Russian language class. All the time along I have also been meaning to take a class in Estonian language, every spring and fall I have signed up and everytime when the class was supposed to start I got an email that it has been canceled due to too few participants. Well, except this spring, I got an email they didnt have a teacher.

Anyway. I decided I wanted to visit Tallinn. I was in Tallinn in 1989, when it was a part of the Soviet Union. It was a project with young people from all over Scandinavia called Next Stop Sovjet. We had people coming from Soviet in the summer of 89 and then in September we travelled to Soviet. Living with local people in thier homes. First I was in Pärnu, then we went to Tallinn, back to Pärnu and then Moscow. We went by Sankt Petersburg also, well, back then it was called Leningrad.

I felt it was time for a reunion with me and Tallin. One of the first thing that crossed my mind was that is would not really be a genealoytrip. I was not going to visit any archives or do any research.  I was only going to visit two cemeteries looking for three tombstones. But I wanted to find interesting places to see and visit as well.

We were staying five nights with no time for sighseeing the same day as we were leaving. I used Evernote for my planning, a shared notebook. I put copies of the flight tickes, hotel reservastion, maps, links and specially links for genealogy in there. I also made a rough schedule for each day. Some things needed to visited a special day since it wasn't open every day, some sightseeing tours was only a certain day a week, some tours only certain times in a day if you wanted it to be in English and so on. So, I made that puzzle and it looked quite nice. Ofcourse, looking around I found some interesting places to visit. A couple of relatives were into theatre and when there, why not just walk passed that theatre and take a picture. Why not take a picture of the church where my grandmother was christened. Why not in case of time drop by the Music and theatre museum. And ofcourse, after founding on-line, one relative which I had no photo of would have a picture in the Jewish museum. He would also have a small biography in the Encyclopedia of Estonia, the 2008 edition. I was sure I could find that a the national library. I carefully typed down open hours and when I was done I had a couple of more genealogy related must-dos:

Besides from using Evernote to plan everything I also used Google Earth. Since I wasn't at all familiar with Tallin I felt I needed to pin out all the places on a map. That made it easier to see what places that were close to eachother and plan the days. I marked genealogy related things with one color, other places I wanted to visit with another color and I also looked up a couple of restaurants. When I was done with the map I exported it as a kmzfile, emailed it to myself so I could open it on my iPad.


So, success? Well, I got the pictures all right. Coming to the Jewish museum in the morning it was closed and opened two hours later. That day we had already two different tours booked but we managed to squeeze the museum in between. Cemeteries, check, all three of them. Coming to the library it was closed. That was the last day and I wanted to buy some souvenirs. So, while I did the shopping my nice boyfriend went back to the library when they had opened. When they finally found the right edition of the encyclopedia it was all in Russian and the liberians at the library at the time didn't understand Russian. So no luck at the library.

Motivation Monday - My goals for August

I knowAugust has already started but today is also the first day of a three weeks long vacation for me. I was looking at my goals for July, perhaps I should have done that more often during July as well.

I have spent most of my genealogy time this month doing research in Sweden for a friend. It has been (and is still, Im not done yet) very interesting. It is nice to look into other databases than I normally do, look into other parishes and cities that I am not all familiar with. New mysteries to solve with minimum of clues. And then putting it together in a nice format for presentation which I usually don't do with my own stuff. I want to do research but this time I have been pushed out of my comfort zone (popular expression right) and work a little more with design. I use Swift Publisher for mac (I have had it for a while) and watching their youtube-presentations on how to really use the program was a motivator by itself. Since I work at a newspaper I am familiar with the Adobe CS package but at IT you don't exactly use it at a daily basis.

Something else I found very interesting was listening at the latest episode (158) of Genealogy Gems Podcast with Lisa Louise Cooke. She talked to the producer of the American Who Do You Think You Are? show and it was cool to hear about how they put those episodes together.

So, goals for vacation and August (Pretty much July Copy - Paste)

Besides that Im invited to a family reunion that I am really looking forward to. I am also sure I will be able to come up with a couple of interesting blogposts in a couple of weeks. With vacation I hope I will have some more time to keep up with genealogy news and discover more interesting genealogy blogs. 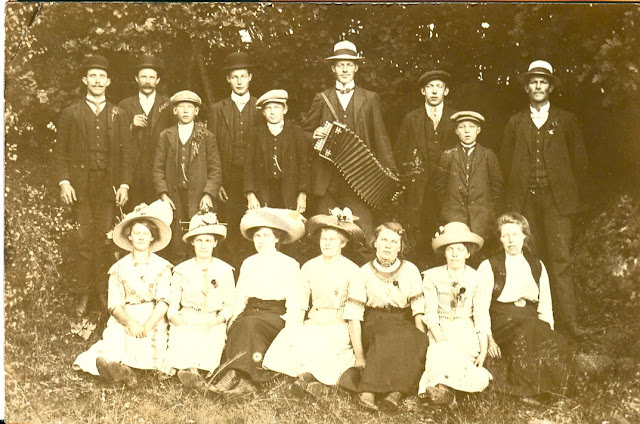