Day 5, one of those days

Ok, lets go back a few years when I and my parents went to see my mothers cousin. He had a bunch of photos, letters and all sort of family research goodies. And lots of photos didnt have names on them. Two generations back the people on the pictures were well known but now noone knows.

One picture has really cought my attention. Taken outside in the snow. When I first saw it I got the feeling it was taken in the US, I dont know why. Probably wishing it would be "my emigrants". Few weeks ago I looked closer at it. Especially at the man who holds a newspaper. I noticed it said "Norra" on it. Which would probably be the paper Norra Skåne which is in the area of north east part of Skåne (in the very south of Sweden) where my moms grandparents on her fathers side came from. Fine. 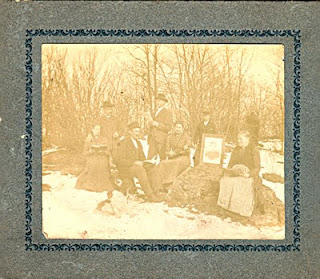 Last week, I was browsing some sites and found a link to a man who has digitalized a bunch of records. I found two of those collections very interesting. I bought them and I started to browse them when they arrived in the mail. Then it suddenly happens. When going though a whole bunch of pictures I recognize the picture that turns up on my screen. That feeling.. a mystery getting so much closer to its solution. You get all focused and feel the butteflies in the stomach. A big grin on your face (only stopped by your ears) and you feel your heart beat. This is the great reward after all those hours looking, looking and looking without a result. This is the reward for being that stubborn person that refuses to give up and quit. This is the reward you will live on for a few weeks and that well keep you going and extra motivated.

So, there it was. My picture. With names next to it. Ok, it was common names. Bengta and Axel Persson. Anders Nilsson (with the newspaper). Nils Persson and Augusta. Nilla with the picture of the husband Nils Nilsson who died in 1896.

Thank you for those clues. Place was Bubbarp (in Skåne, Sweden). And I had a date of death, 1896. Turned my face to ancestry.com and the Swedish Churchbooks on-line. Found the Nils Nilsson I was looking for. There were a couple of them but after looking into the house examine rolls I found the family.

I also found out that Nilla was Nils second wife.

Problem solved? Well. I now know who the people on the picture are. I looked into my CDs Swedish deaths 1901 - 2009 and Buried in Sweden to find out more. And it all matched. Augusta was married to Nils Persson and Bengta was married to Axel Persson.
So, why did my relatives have a picture of this family? None of then are found in my tree (yet..). Bubbarp isnt a huge place so if nothing else, there were neighbours and probably good friends. I added them all in my special familyfile with misc people (here I put up people I research but thats not related) and I made a litte decendant chart. The father and grandfather of Nils I found in the book Gods och Gårdar  (= houses and farms). Nice books and sometimes you find out really nice things like in this case. 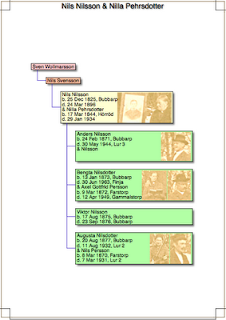 So, thanks to the archive made by Sigurd Svensson which now is availabe to buy from Tore Månsson that picture that cought my attention a few years ago is not a mystery anymore. And I got that amazing feeling doing the happy dance!
Day 5 completed:
*Identified an old picture and researched the people on it.