Im helping out with the cementary inventory arranged by the Swedish Genealogy Society. Right now Im typing in from the old inventory into the new database. I picked the cementery in Kropp since it takes me five minutes to walk there. Im also taking geotagged pictures and uploading them to billiongraves.com.
Walking around at that cemetary Im getting more and more interested about the people behind (well, rather under I know) the names on those stones. How was their life and what did they do an ordinary day. How did this place look a hundred years ago?
Wouldnt it be nice to be able to walk in that cemetary and have something little to tell about every person? I don't really have any relatives of my own in this little area, but if I dont write about them, who will? Its not that I dont have a lot of other things to research, but as importent it is to know my history and where I came from I think it is to know this little spot on earth where I now have my home, love and where I want to stay forever.
I randomly I picked the first stone I came to think of. It is a beautiful stone, shaped like a tree, and you pass it when walking to the entrance to the church.
It has three names on it:
P J Hilding, born October 5 in 1835, died November 17 in 1915.
Thilda Hilding, born 26 of May in 1840, died February 5 in 1920
(which happens to be today, 92 years ago, that felt a bit weird)
Alma, born September 4 in 1882 and died on August 18 in 1910.
It says P J Hilding was a gardener, and that makes sense when you think of the shape of the stone.
I did a lookup in the houseexaminerolls of 1881 - 1885 from Kropp and I found the family on page 4. Living at Rosendahl which is the castle built in 1615 by Andres Bille not far from here. 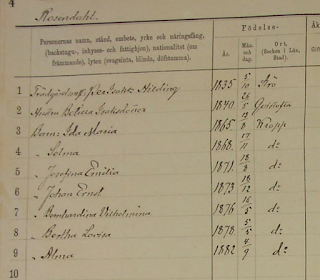 The family consists of the gardener and father of the house, Per Isaksson Hilding (born in Strö), his wife Botilla Isaksdotter (born in Kvistofta) and thier seven children, six girls (Ida Maria, Selma, Josefina Emilia, Bernhardina Vilhelmina, Bertha Lovisa, Alma) and one son (Johan Ernst). Next to Pers name it says that he has received a goldmedal from The Royal Patriotic Society. That must have been a big event since the priest wrote it down.
Looking at the Swedish Census of 1880 CD this is the family:
Isaksson, Per Hilding - 1835 Father
Isacsdotter, Botilla - 1840 Mother
Ida Maria - 1865 Child
Selma - 1868 Child
Josefina Emilia - 1871 Child
Johan Ernst - 1873 Child
Bernhardina Vilhelmina - 1876 Child
Bertha Lovisa - 1878 Child
Notice that Per is called Isaksson as a surname, not what it says on the stone. His wifes name is Botilla and Thilda as it says on the stone is ofcourse short for Botilla. In the houseexamine rolls he is also known as Per Hilding.
On the CD Swedish Death Index 1901 - 2009 it says Pers place of birth is Strö, Skaraborg but in the census it says Norra Strö, Kristianstad. Looking in the birthbook of both Strö and Norra Strö I find no Per born on October 5 in 1835. Neither in Östra Strö or Stövelstorp. I find one Per born on October 5 in Västra Strö. Could be him.
So, need to follow him backwards. In houseexaminerolls 1861-1865 it says he came to Kropp in 1863, from Härslöv.
I find him in Härslöv, being a gardner at Hildesborg (another beautiful castle, at the time owned by Wong) He came to Härslöv from Bosarp in 1857, age of 22. Going though the houseexamine rolls of Bosarp  (1856 - 1860) without finding Per. I didnt find any moving in/moving out records for Boarp either so instead I had to go back to the person I suspect is him in the birth book looking forward and hope the two lose ends will connect at some point.
He leaves Strö for Näs, which acctually is Trollenäs when he is 15 years old, in 1850. He stays at Trollenäs  until 1853 when he moves to Malmö.


In the moving out record of Trollenäs (found in Gullarp) is says gardener student P J Hilding. That was the last piece needed to solve the puzzle. Per was born in Västra Strö.
So, Per moved out from his parents at age 15 to Trollenäs in 1850. In 1853 he moves to Malmö and he is a gardener student. In 1857 he moves from Bosarp to Härslöv where he works as a gardener at Hildeborg, another beautiful castle and in 1863 he comes to Kropp and the Rosendal castle. On October 19, 1864  he married Botilla Isakdotter from Kvistofta.

Im still thinking about how he picked his last name, Hilding. Im also wondering about the J in P J. In the census he is Per Hilding Isaksson and perhaps the J is really an I. And last, Isaksson, to me it looks like his fathers namn is Ivar. This is genealogy. You solve one mystery and you end up with even more questions. Thats the beauty with it, don't you agree?