This tombestone I found when talking pictures at the old cemetery in Helsingborg to upload on Billiongraves. It says Captain Carl August Nilsson, born September 8 1837, dead April 11 1876, sacrificed his life to save others. 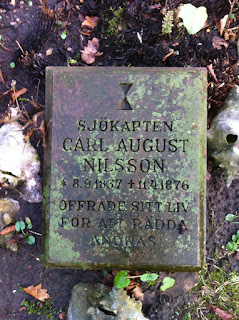 Ofcourse that note on the stone made me wonder what happend. A look in the deathbook of Helsingborg shows that four men died that day by drowning, April 11 in 1876.

Here is Carl August Nilsson in the houseexamineroll with his family at the time he died, it is his wife Ingrid Christina Andersson (born May 31 1835, Helsingborg), their son Albert William (born January 20 1864, Helsingborg), daughter Elise Josefina (born April 15 1867) and daughter Olga Emilia (born Septemer 8 (same date as her father) in 1874, Helsingborg).


In the newspapers there was a small article, apparently there was a storm causing a lot of problem with the ships outside Helsingborg and it mentions Nils Möller and Jacob Christian Åström drowning as well as two other sailors not mentioned by name, but I guess that would have to be Carl August Nilsson and Nils Magnus Holmberg,